The RT-400 is a portable direction finder, which is designed for search and rescue operations (SAR), law enforcement and localizing of radio interference sources. Due to its wideband, the system allows homing to any radio transmitter with a frequency between 118 and 470 MHz inclusively all emergency frequencies such as 121.5, 243 and 406 MHz (Cospas-Sarsat). The DF system uses a tablet with a compass and GPS.
The “DF-Scout” software allows displaying and saving bearing lines on the moving map as well as localizing beacons by triangulation. In case of Cospas-Sarsat decoding, the beacon position, true bearing and the distance to target are also indicated directly on the map. Homing Cospas-Sarsat beacons becomes easier when the SAR Scan algorithm is running, which detects the correct Cospas-Sarsat frequency and scans for 121.5 MHz between C/S pulses. The antenna is mountable on vehicles and can be carried by persons. This allows searching from the vehicle until the terrain becomes impassable and proceeding by foot with the same antenna. Due to the light weight, comfortable frame and the wireless antenna / tablet communication, the handling becomes very easy. The stable and water protected system can be used at rough outdoor conditions.

• Portable DF System for search and rescue operations (SAR), law enforcement activities and localizing of radio interference sources
• Wideband homing on frequencies between 118 and 470 MHz
• All relevant emergency frequencies such as 121.5 MHz, 243 MHz and Cospas-Sarsat (406 MHz) included
• Bearing display on moving map and beacon localization by triangulation available
• Decoding of Cospas-Sarsat messages and displaying beacon’s positions on the map
• Intelligent SAR Scan algorithm with up to 4 frequencies monitored between COSPAS-SARSAT pulses
• Displaying the own track and defining GPS waypoints
• Mountable on vehicles and persons for using a vehicle first and wearing the DF-system as backpack in heavy Terrains
• Water protected system for using in rough outdoor environment conditions
• Easy handling due to the light weight, comfortable frame and wireless antenna / tablet communication

The Car mounting kit allows to attach the RT-400 to nearly any common roof rack. The range for rescue missions expands tremendously by this feature.

The Optional Frequency extensions can be ordered seperatly to extend the frequency range of each system individually. 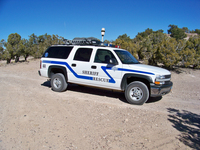